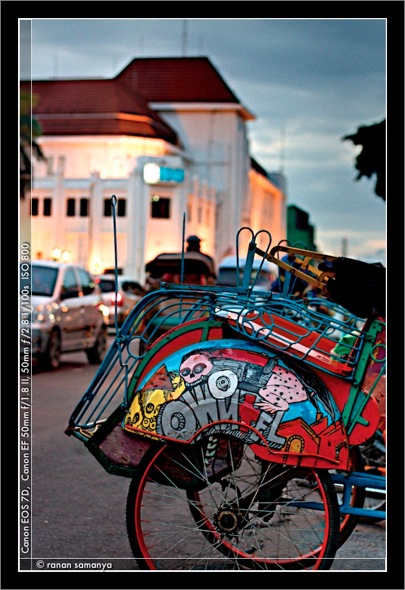 It is hard to uniquely capture Yogyakarta when so many people have already done it beautifully. So when I visited this cultural city for a short 3 nights business trip last month, I didn’t prepare myself to have the chance to get a decent frame, until I finished processing this.

This picture, an HDR from 3 frames with my usual 2 stops variation between each frame, is the best I can come up with from the 400 something that I took. And it was not an expected frame. I was actually focusing on the historical buildings at the start of Malioboro, the most famous street in Yogyakarta. On the background is the Bank Negara Indonesia, BNI, built in 1923. I was deep in thought on how to capture it with my camera mounted on the tripod. Suddenly this rickshaw appeared and parked itself just in front of me. At first I was disappointed, but not for long. The side of the rickshaw was nicely painted. The word owntel, if I guessed it correctly, came as a variation of onthel, which, in Javanese, means to cycle (do let me know if there is another meaning of owntel).

To me, this frame depicts a little bit of Yogya’s hectic life — a mix between the old and modern era, with culture rich in them. Thank you for stopping by and have a great weekend.