Last week I was embroiled in a light facebook chat about various religions, the Crusades, and God. At one point one of my friends who is living in Germany asked, almost shouted,  “Wo ist Gott?”, where was God during the Crusades, and why would He let the war continued for around 300 years? Honestly, although that time I picked a few verses from the Bible, I don’t really know the answer.

My mind went to a belief in Vietnam called Cao Đài. It believes that all religions have one divine origin, which is God, or Allah, or the Tao, or the Nothingness, one same ethic based on love and justice, and that these are just different manifestations of one same truth.

Interestingly, Cao Đài worships Buddha, Tao, Christian, and Confucianism. God is symbolized by the Divine Eye. While muslems pray 5 times a day and the Buddhist 6 times a day, Caodaiists are expected to pray at least once a day either at 6 in the morning, at noon, 6pm, or midnight.

At a glance Cao Đài sounds like a mix of everything, as if it doesn’t have a stand, picking a little bit of everything. But the idea is clear, that all religions have one objective.

I am not a firm believer of any religion, but believe that there is a transcendental being somewhere up there. A belief is a belief, it is a one-to-one relationship with a Transcendence. For some the Transcendence is Jesus, for others Allah, and some will say God.

So again, I don’t have any clue where God is. But I remember a dear friend once told me that “He is just a pray away”. Pray if you believe, in whatever belief you are in. It may help. And if any of you have found the answer, do help and let me know, for I too would like to know the answer.

Enjoy the pictures and take care! 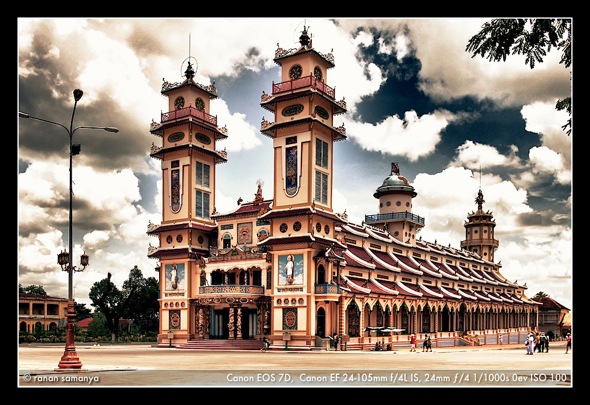 The Great Temple Tay Ninh, or Holy See, is the center of the sect. Constructed between 1933 and 1955, it is located approximately 100 kilometers northwest of Ho Chi Minh City. Ceremonies are held four times daily at the aforementioned times. 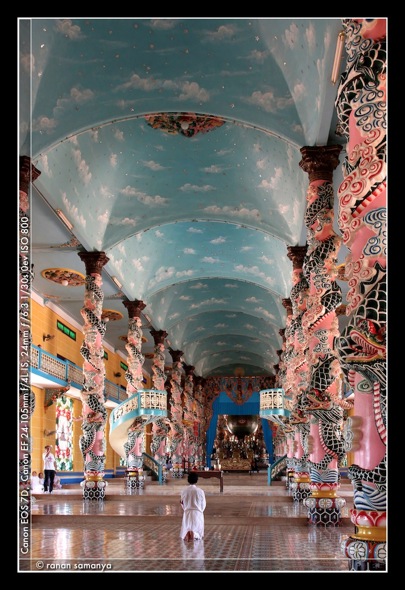 The temple is very beautiful, highly decorated in the inside. The pillars are all decorated with a dragon sculpture. There are a total of 28 pillars representing 28 manifestations of Buddha. 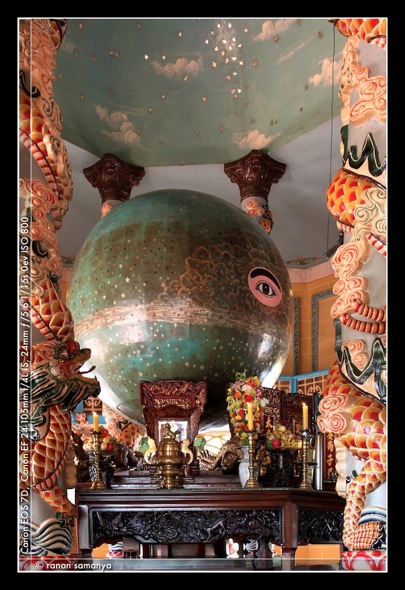 The Divine Eye, symbol of God. it is specifically the left eye because Yang is the left side and God is the master of Yang. 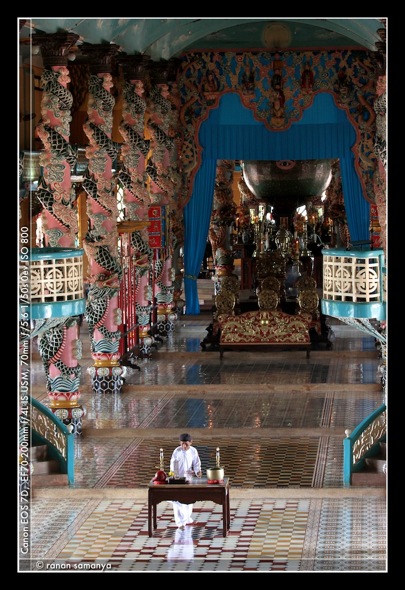 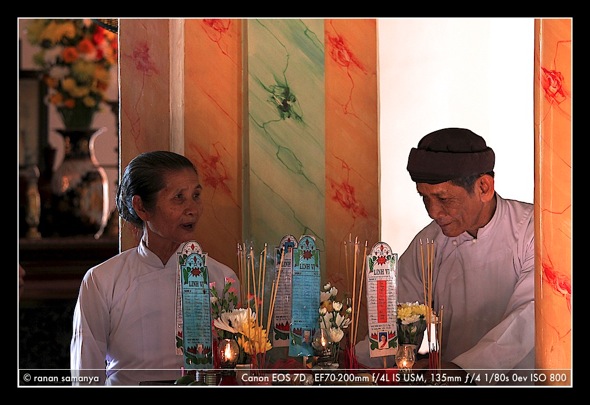 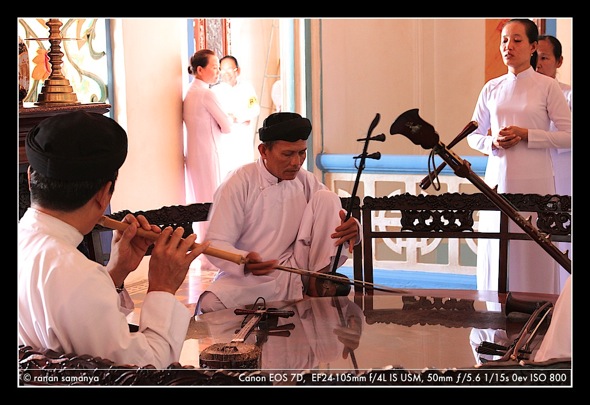 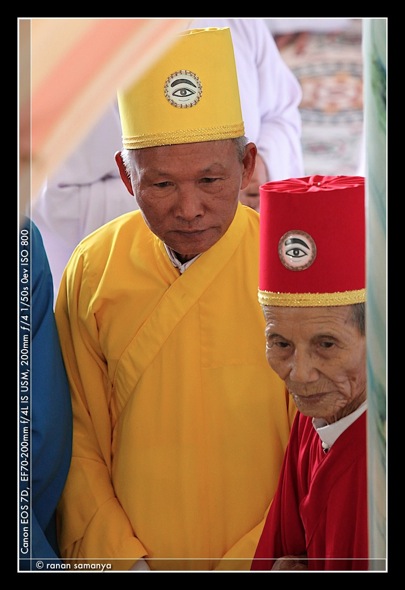 The priests have three different robes colors representing Buddhism (yellow), Taoism (blue), and Christianity (red). The Divine Eye symbol is on each of the hats. 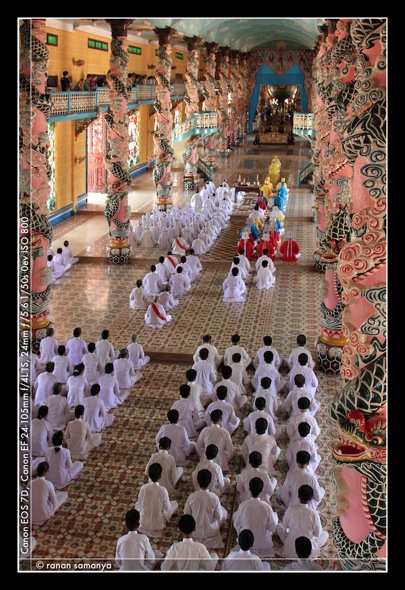 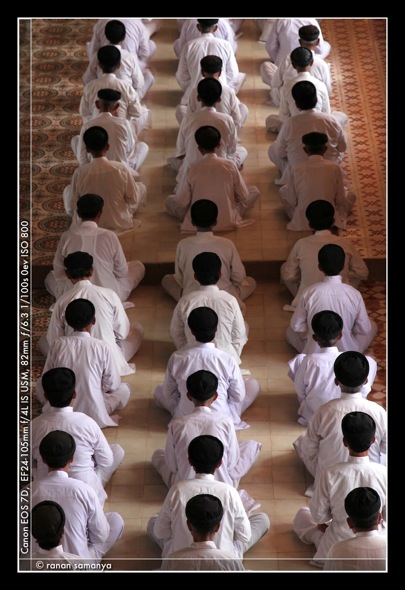 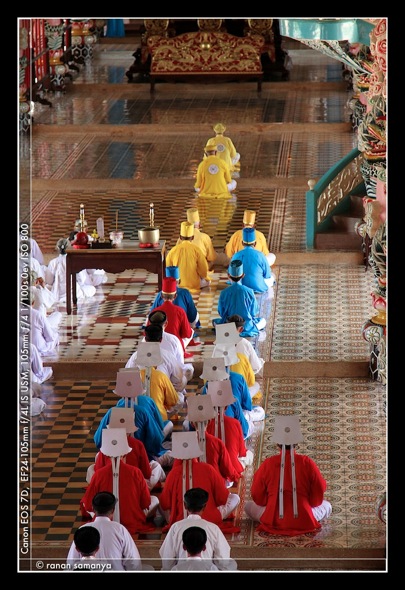