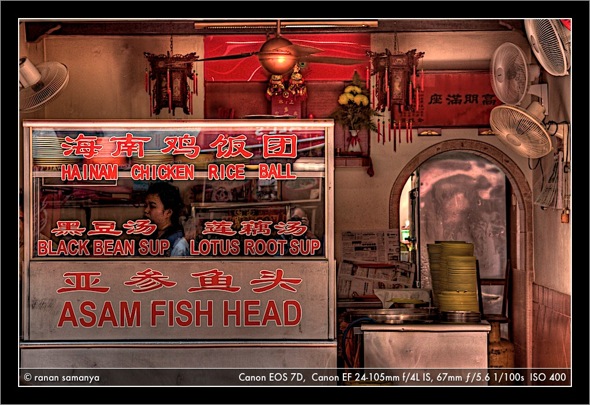 Once upon a time, people in Malacca were not as prosperous as they are now. In order to easily distribute the limited amount of rice to each family member equally, they divided the cooked rice in the form of balls. Another will tell a story about keeping the rice warm longer in this shape. Hence, in either way, the Malacca’s chicken rice balls, a compulsory culinary treat, well known to date.

There are three prominent chicken rice balls in Jonker Street; the most famous is Chung Wah. I personally prefer Hoe Kee, as Chung Wah’s taste of garlic is rather strong.  Hoe Kee is also popular for the different ice mix, such as ice kachang and ice cendhol.

To me, though, what made Hoe Kee’s three generation restaurant excel is in the ambiance. A typical Chinese house with a small courtyard, the walls are full of Chinese characters and paintings. This, and the plentiful of fans (standing fans, wall fans, and ceiling fans) made the restaurant relatively cool.

The following three pictures, as well as the first one on top, are tonemapped from three frames with a 2 stops difference.

I hope you enjoyed the chicken rice balls, err… I mean the pictures. 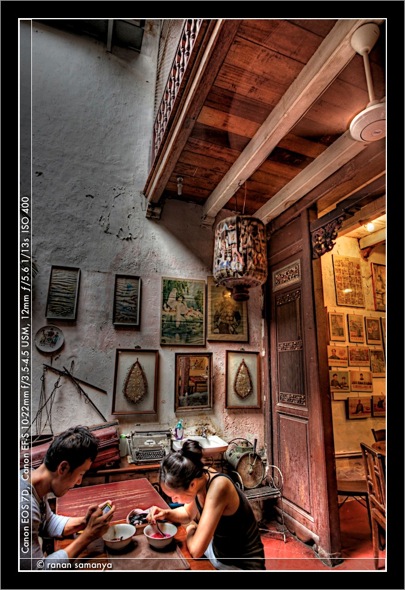