the power of fifty

Last year I enjoyed shooting mostly with the down to earth priced Canon EF 50mm f/1.8 lens. In addition to the tremendous reduction of weight (I used to cary a 70-200mm f/4L IS and 24-105mm f/4L IS plus a tripod everywhere I go), I was also more invincible to my subjects due to the short lens. Following are some good shots during last years’ course of time.

Dancing fountain. The shot above was done in Singapore’s Bugis Junction. The fountain is a favourite place for kids to get wet in public in full attire. if you love taking pictures of kids you will love this spot. The lens’ f/1.8 enabled me to separate this happy kid from the surrounding. And probably also because I was using this small, amateur lens, his mother didn’t mind it.

Three generations. A glimpse of my family. A shot by the pool of Harris Hotel Batam Center, Indonesia, again the f/1.8 can achieve decent sharpness, especially when the distance of each object is more or less the same to the lens. On the right is my father, now 82. My daughter (in purple) and niece were in the centre. And you have guessed it, that’s me on the left. These two photos, and others in my archives, really satisfy my need for portraits and candid shots.

Museum. Taken at Marina Bay Sands Singapore in front of the Arts Museum, just to show that this lens is also good in taking artefacts. And boy I like the water lilies so much. They were so vivid when they bloom they just steal the entire scene.

The force of nature. This piece of art is made by a Spanish artist, Lorenzo Quinn, from aluminium and stainless steel, and can be found at the Marina Barrage Singapore. It “depicts a woman seeking to harness the Earth and the force of nature. The sculpture symbolises the strong bond between human beings and nature as well as the need to respect and conserve nature”. It was a bright afternoon with a lucky blue sky as the background. Built across the mouth of Marina channel, Marina Barrage is Singapore’s 15th reservoir and the first in the heart of the city. I have not dwell in this area, but I surely will as there are a lot of must-sees over there.

Chinese scented tea. Still in Singapore, somewhere in Chinatown. I was just accompanying my friend for his routine spending of Chinese tea. Not just any Chinese tea, mind you, a mere 100g of these leaves cost SGD 30 minimum! In this shop we were served the royal way of drinking Chinese tea. My first experience, and would love to come here again with him, just to redo the whole procession.

Aroma. Aroma is a famous, old coffee factory and shop in Bandung, Indonesia. It was started in 1930, and still serving coffee maniacs. I took three frames and created a black and white HDR to push out that old and battered concrete. 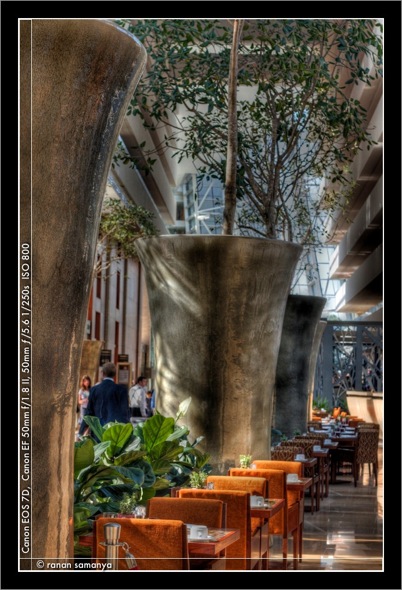 Rising forest. This is a permanent installation in Marina Bay Sands Singapore. Those giant glazed stoneware pots were brought in from China. It was said that they had to create a special kiln to make these pots. This is again HDR from three different frames each at 2 stops interval.

Kilometer zero. Almost everybody who have visited Yogyakarta, Indonesia, know Malioboro. At the start of Malioboro we can find quite a number of old colonial buildings. This BNI bank is one of them. Another HDR during twilight.

Jonker street. A street with a hell of a load of life in the evening, and one of the centre attraction in Malacca, Malaysia. And a wide variation of objects for our lenses. The photo above and below, were taken without a tripod, and still managed to give good results.

Malioboro’s rickshaw. Yes, I am a nocturnal. And while I was looking to find alternative ways of capturing Yogyakarta‘s Malioboro life, I encountered interesting activities just after the shopping time (around 10pm), and sleeping is one of the activities. If there is one disadvantage of this lens, that will be focusing in low light. Many times I had to switch to manual focusing mode. And somehow sometimes it just captured a rather bleached colours. 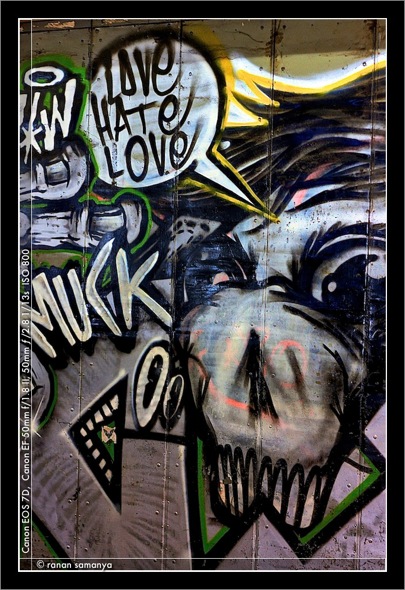 Love hate love. Love to take murals and graffiti with this lens. And the power is doubled when we do HDR. It increased contrast and popped out the colours. With good timing we can even shoot murals from across the street without much distraction from the traffic. Take a look to the complete grafitti, a stich of 6 frames taken in the middle of the night, here.

Tanjung Uban. I shot many frames in this little port in norther Bintan, Indonesia. And I love the reach of the lens (which, on my 7D, becomes 80mm). And most of my Tanjung Uban shots were sequence of three, from which I created HDR.

So these were 2012. What 2013 will bring depends on many variables. Thank you for following my blog last year, and I hope it did you good.

4 thoughts on “the power of fifty”