Samosir, the land of churches

When you go to Samosir, forget first impression. Go measure the island, which has around 100km of main road encircling it. You will find a lot of churches. I did 40% of the distance, and already lost count on the number of churches there; Methodist, Catholic, Protestant, Bethel, and others. You name it, most probably they will have it. Almost every 200m or so you will find one church. If you have been to Jakarta or Bandung, it’s like finding Seven Eleven or Alfamart over there.

While bicycle rentals are widely available, if you can drive a motorbike I would recommend it for a daylong exploration. A full day rental costs IDR 90,000, gasoline included. You can also request an automatic transmission motorbike.

Pictured on top is the HKBP church with the Roll-On-Roll-Off Terminal in front. Did you notice another church behind? Below is the Catholic Church of Maria Claret in Sangkal, Simanindo District. All churches have two things in common: a (usually tall) tower with the Cross on top, and a beautiful backdrop of Samosir’s hills.

Ludwig Ingwer Nommensen, the German missionary who succeeded in converting Samosir’s King Sidabutar to Christianity (and some 2,000 other Batak people in 1865) must have been smiling up there: he had successfully spread Christianity in Samosir, probably exceeding everybody’s expectation. 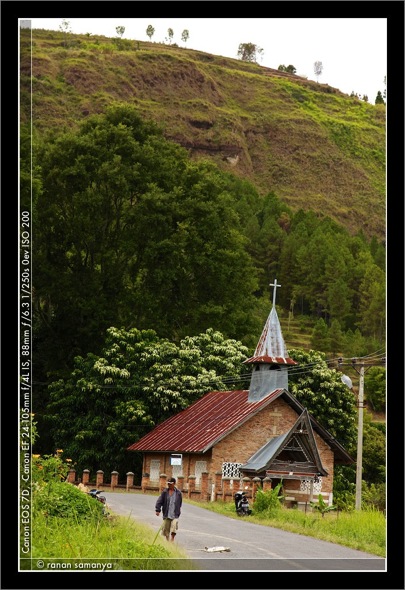 Posted from WordPress for Android

3 thoughts on “Samosir, the land of churches”