Dreams and Reality, in awe

Last year the National Museum of Singapore opened a special exhibition entitled Dreams and Reality: Masterpieces of Paintings, Drawing and Photography from the Musée d’Orsay, Paris. Over 140 paintings, photographs and drawings from the mid-19th century to the early 20th century were on display. The exhibition explored the reaction of man towards modernity at the turn of the century from 1848 to 1914.

As much as I enjoyed the displays, I was pretty much amazed by the way people stood in front of the paintings, stared at them for quite a long time, in silence. Here are a few that I managed to capture.

The first that attracted my attention was definitely Van Gogh. His infamous Starry Night (1889) was displayed against a black background in a dim room. The way it was displayed and how light was focused only on the painting was cleverly done. His quote on top of the wall where his painting hung completed the whole scene. I noticed this is one painting that attracted many to be pictured with.

Next to my attention was Monet’s Portrait of Madame Gaudibert (1868). M. and Mme Gaudibert of Le Havre were the generous and understanding couple who came to Monet’s rescue in a year of cumulative misfortunes. Honestly I know Monet because my mother hung a lot of his work all over the house when I was small. I am too dumb to understand the skill that Monet put to reproduce the dull satin into an attractive colour of this life size art. Ladies were the ones who stood here for a long time, probably envisaging to be in such a fine Parisian dress. 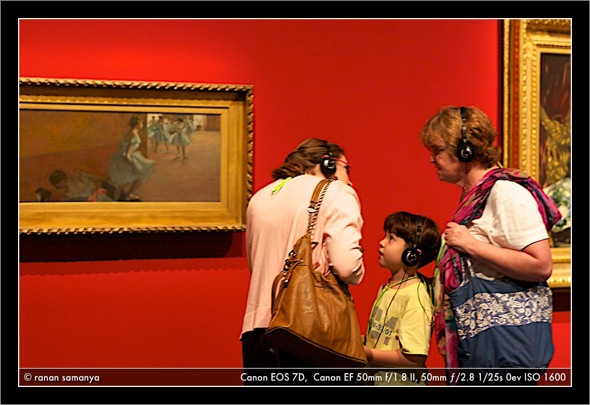 This Dancers Climbing a Staircase (1886-1890) by Degas  caught my eyes because I could actually felt them moving. Those who know Degas will know that about half of his works are devoted to ballet. Over here, grandmas, mothers and daughters dominated the crowd. And moi.

The Lady with the Glove (1869) was Carolus-Duran’s first large scale portrait work. Here he painted his wife. It actually won a medal back then. Anybody who encountered this piece would stop in awe: it is huge (at 228 by 164 cm). Yet delicate. Yes, anybody.

First I thought this is a painting of a female. But I was mistaken. Young Boy with a Cat (1868 – 1869) was Renoir’s piece. And for me this is a strange piece, not the typical Renoir we would find. Would you believe me if I tell you that Renoir made this when he was only 27? People would usually stopped by, looked at each other, some would smile, and continued. I think if we let a cat pass by it will also stop and miauw.

Take care and enjoy your weekend.

2 thoughts on “Dreams and Reality, in awe”